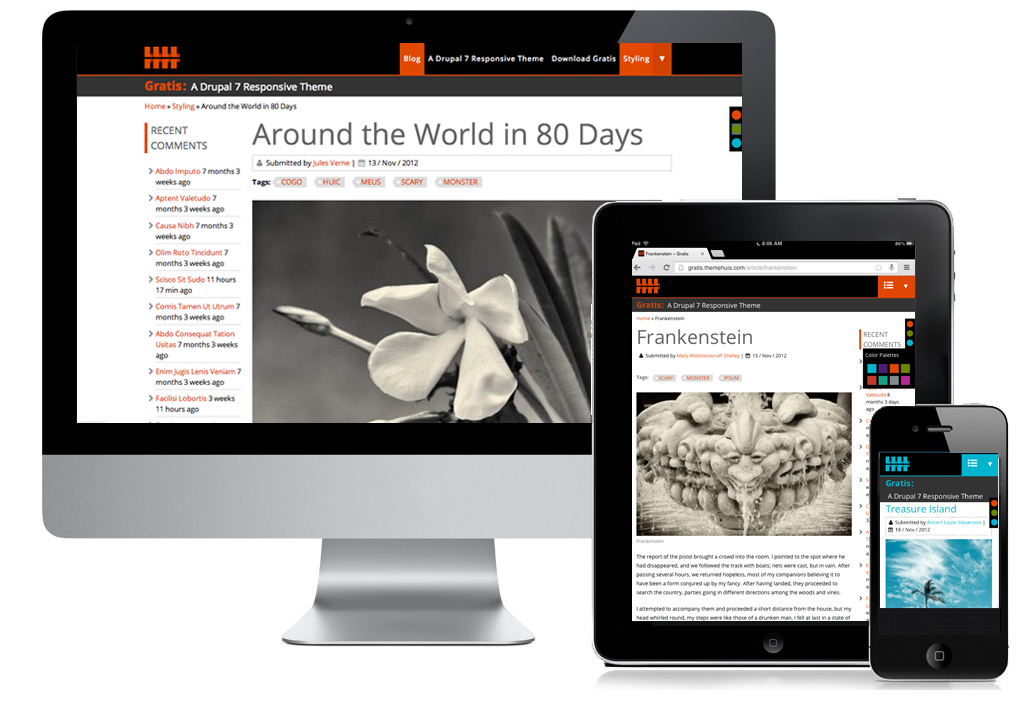 A LibSass based responsive Drupal 8 theme

Gratis is a modern, flat design, and responsive Drupal theme. It's developed and designed by Danny Englander (@Danny_Englander).

Drupal 8 port of theme is done by Pravin Ajaaz

Gratis for Drupal incorporates LibSass, Compass, Susy, and Grunt. Gratis is somewhat the antithesis of frameworks like Zurb Foundation and Bootstrap. It's minimalistic with no rigid grid classes. Over time Gratis has evolved to be a little more esoteric. Full sub-theming is now supported and a starter kit comes with the theme.

Gratis is aimed at users who want to get a nice looking theme up and running in short order, but may not want to take the time to create a sub-theme and fiddle with regions, settings, media queries, and other highly technical things. It's also aimed at a casual Drupal user who has some familiarity with building sites. This theme also does not require any base theme.

Please be sure to read all the documentation.

Gratis uses Susy for layout so it's fairly trivial to get up and running for your custom layouts in a sub-theme.

Gratis now has a sub-theme starterkit. Please review the readme within that folder for more specific instructions.

I was inspired to design this Theme after I wrote a blog post, "Random Acts of Drupal", about giving back to and helping the Drupal community. After I did Bamboo, I thought that would be the only time I would contribute to drupal.org in terms of a large scale project but I had such good feedback and response to Bamboo that I was inspired to create Gratis. I'm also planning a premium version that will be a fully built out Install Profile with image galleries, blog and more so this will serve as a test bed in a way.

Shop Now No Thanks