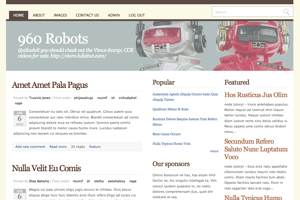 960 Robots is a theme created by Lullabot for its Drupal theming videos. This theme, based on the 960 grid system, features two columns on the right side of the page, a two-column footer, and calendar-page dates for posts. The theme also uses Twitter's search API to display a random message based on a configurable search string as the site's slogan (PHP5 required).

The background of this theme
This theme was originally built for Drupal 6, to teach Drupal's theming concepts in Lullabot's Theming Basics and Advanced Theming videos.

Note: The 6.x-1.0 release is an old version that it matches up with the examples on the videos. If you're downloading this theme to reference while watching the video, get 6.x-1.0. Otherwise, get the latest 6.x-2.x or 7.x-1.x releases. The 7.x-1.0 release matches the theme in the Drupal 7 version of the videos.